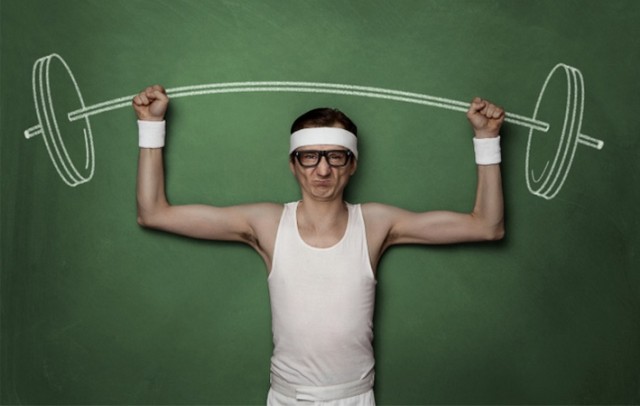 The taunting started early. When I got my first watch, I was teased because I wore it halfway up my forearm. When I went to the pool, I was mocked because you could count my ribs.

We all know kids can be mean. In search of their own place in the social hierarchy, they’re motivated to find and exploit the weakness in others.

But when your weakness is literally weakness, you find yourself in a different kind of hell.

Some of this is hard-wired in our biology. As I pointed out in the Men’s Health story Why Every Monday Is Chest Day, we instinctively size up other men we come across, giving more space to the ones we judge to be bigger and stronger than us, and less to the ones who appear smaller and weaker.

We also understand that other men are sizing us up.

The average guy expects to see a mix: some bigger, some smaller, and some about the same size. But when you’re skinny, almost everyone you encounter has some advantage over you.

Even the guys who are obviously overweight look at you and see someone they can disrespect.

(For more transformative stories and life-changing advice from top health and fitness experts, register now to be part of the Unleash Your Greatness Summit. You’ll get unprecedented access to some of the world’s most inspiring speakers, right from the comfort of your home!)

When I was in college, I spent my summers lifeguarding. Although I was easily the skinniest guy on staff, I was still a lifeguard—which meant I was a lot more popular with girls from June through August than I was during the other 9 months of the year.

One of my coworkers was an obese guy named Bob who worked in the pool’s locker room. Throughout the summer, he made comments about my physique. Nothing memorable or clever—just little digs about how scrawny I was.

Then Bob made a comment that finally set me off. He said he didn’t understand how the girl I was dating could be attracted to someone who looked like me.

“You know,” I said, “you’ve been saying shit all summer about how skinny I am. But I’ve never once pointed out how fat you are.”

The stunned look on his face told me he didn’t see that one coming.

“Everyone talks about how skinny you are,” he explained. “So I just thought it was okay.”

The Rules of Attraction

I mentioned that I was a lot more popular during my lifeguarding days. Back then I assumed it was because of the job itself: You’re in charge. You’re on display. You’re a Coppertoned centurion.

But as soon as the weather cooled and the tan faded, I was back to being more or less invisible.

What I didn’t know then is that women didn’t look at my physique the way I did, or the way other men did.

It turns out it isn’t about your size, but your proportions: In 2008, anArchives of Sexual Behavior Study revealed that women are most attracted to muscular men whose shoulders measure 1.6 times the size of their waists.

And according to the study authors, the ratio has the most powerful effect with men who also have a low body-mass index (BMI)—20 to 21. For a guy who’s 5’10, like me, that would be 145 pounds. That’s pretty thin.

So I worked hard in the gym to pack on as much muscle as I could. But I was still smaller than I wanted to be.

Related: The Workout All Skinny Guys Have Been Waiting for

Ironically, everything changed when I began working for a fitness magazine.

Too Much of a Good Thing

Writing about strength training had two big effects: I learned more effective ways to build size and strength, and I sat at a desk all day.

Combine that with the slowing metabolism of a guy in his late 30s, and it was suddenly easy to gain weight.

I gained a lot. All the way up to 190 pounds, I’d estimate, at my heaviest. Nobody called me skinny anymore, and for a while that was liberating. I was never actually big or strong by weight-room standards, but I was a lot more of both than when I started.

Still, it wasn’t long before I experienced the drawbacks of that extra heft. I was older and busier, with less time to train, and more frequent injuries.

The combination did a number on my waistline. In my quest to stop being skinny, I had made myself fat.

I came to realize that a bigger body was like a bigger house, something else I’d fantasized about having from an early age. It requires more fuel. It demands more maintenance.

There’s more that can go wrong, and in middle age those things take longer to fix.

So I lost weight, down to 175 for a while, a little north of that now. After decades of struggling to reach that weight, before going way beyond, it’s comically difficult to hold the line there.

But it’s even harder to stay lean when I’m heavier. That’s how I finally made peace with being small again. As long as I move well and feel fit, it beats the alternative.

Today I can’t remember the last time someone called me skinny. If someone did, it would probably be meant as a compliment. But I doubt if I’d take it that way.

To me, it’s always been an insult. Too many bad memories.

Lou Schuler is an award-winning journalist and contributing editor to Men’s Health. His new book, with coauthor Alwyn Cosgrove, is Strong: Nine Workout Programs for Women to Burn Fat, Boost Metabolism, and Build Strength for Life.