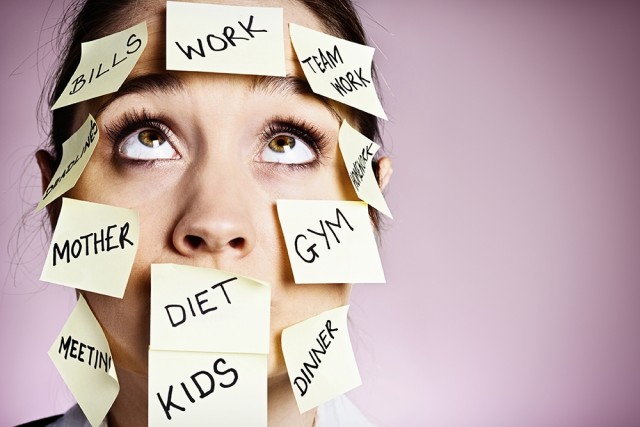 Recently, my husband’s brother and his family came to stay for the weekend. In the days before their arrival, I dashed around the house like a woman possessed, washing towels, ironing bedsheets and spritzing the spare bedroom with a specially bought lavender room spray.

I planned the meals carefully around everyone’s different tastes, making a mental note that my brother-in-law doesn’t like pasta and my nephew won’t touch fish. I got the wine I know my sister-in-law likes and bought some little games for the children. I only really stopped short of leaving chocolates on the pillows and rolling out the red carpet as they pulled up outside.

Much as I loved seeing them, by the time they left I was frazzled, made worse by the fact that my husband seemed oblivious to the hours of effort I’d put into making sure his family had a good time. The weekend brought something into very sharp focus for me – that, for as long as I can remember, I’ve been the one who runs myself ragged caring about and tending to everybody else’s wants and needs.

My husband cooks, uses the washing machine and is an involved father. But somehow he’s blissfully free from all the thinking involved in family life – meal-planning, arranging play dates, noticing when the children need haircuts. We both work similar hours but it invariably falls on me to remember birthdays, call loved ones to check up on their health problems, or make a note to sponsor the friend who’s doing a charity skydive. These emotional tasks are more mentally tiring than washing the dishes or a mindless whip round with the vacuum cleaner, yet they’re not given half the recognition.

All this thinking and caring isn’t something that’s happened since I’ve become a wife and mother either. Even when I was a fresh-faced journalist working in a busy male-dominated press agency, I’d be the one organising leaving collections or listening to colleagues’ work woes.

I’ve recently discovered that what I’ve been feeling quietly peeved about has a name – emotional labour. It’s when you take on all the stuff that goes largely unnoticed, but is vital for functioning relationships and for others’ wellbeing. It’s what The New York Times’ journalist Judith Shulevitz recently branded ‘worry work’ – and it is generally shouldered by women.

‘Emotional labour is what therapists would call “holding someone in mind”,’ explains consultant psychiatrist Dr Judith Mohring from the Priory Wellbeing Centre. ‘It’s at its most potent within the parental bond, but it’s generally thinking about other people and what their needs might be.’

Sound familiar? Of course it does. I don’t have a female friend who isn’t burdened by emotional labour. Take my schoolmate, Cass, a 43-year-old company director, whose sister-in-law, Lisa, suffers from depression. ‘Lisa idolises her brother but he’ll only text her to see how she is if I’m literally standing over him,’ says Cass. ‘It’s usually me who does the weekly, “How’s it going?” text. It’s exhausting.’

Then there’s the friend who reminded her partner to send his mother a birthday card. The response? ‘Can you email me at work so I don’t forget?’

So why do women do it? According to Mohring, it’s largely because of the cultural expectations of women. ‘It’s the role we saw our mothers doing and we copied,’ she says. ‘I hesitate to generalise, but in society, men aren’t expected to be standing around organising play dates and worrying about other people’s issues.’

She goes on to point out that, when we add up the hours we spend emotionally labouring, it’s massive – and, of course, it’s unpaid. Just last week I spent a whopping seven and a half hours planning and catering for my son’s 10th birthday party, which took my focus away from my paid work.

If all that doesn’t sound bad enough, the constant turning of our mental cogs as we continually ‘hold everyone in mind’ is contributing to insomnia and burnout.

Dr Nerina Ramlakhan, sleep and energy expert and therapist at London’s Nightingale Hospital, says she regularly advises women weighed down by emotional labour. ‘Because women’s brains are wired to think about everything that needs to be done, that has emotional implications,’ she says. ‘My clinic is filled with women who find it hard to delegate, ask for help or say “no”, which in turn leads to overload and makes them more prone to burnout.’

Faced with the reality that my emotional labouring isn’t doing me any favours, I resolve to take a step back. But is it that simple? If I ditched making the beds or giving the sink a wipe down, nobody would suffer. But can I really stop being bothered to remember birthdays or give up the 24-hour thought and planning that goes in to everyday family life?

Surely friends and family will be put out if I stop sending thoughtful texts or dragging them out for a glass of wine when they’re down. And who will chivvy my son to write his thank-you cards after Christmas?

Mohring believes the first step is to place a value on all the emotional labour you take on. ‘Then it’s a case of working out what you can do away with without upsetting anyone or coming across as rude,’ she explains. ‘In many ways, we’re our own worst enemy. I’m also the type who’ll put flowers on the bedside table when my mother-in-law comes to stay. But is it really necessary?

‘Try focusing on the things that have the most value to you and bin the others. Also, think what other people can do to help, and prioritise the things you enjoy. For example, reading with your children or calling in on a sick friend may not feel like work, whereas meal-planning might. By cutting back on all the emotional labour we take on, we might also free up men to take on stuff they enjoy.’

Armed with her advice, I have an honest chat with my husband about just how much time I spend thinking and caring – and how exhausted it makes me feel. He’s surprisingly sanguine and resolves to take on more, so I start forwarding him the emails from the children’s school, give him the task of booking accommodation for our friends’ wedding and mentally wash my hands of being responsible for get-togethers involving his side of the family.

We also agree that I’ll put a birthday calendar on the kitchen wall for everyone’s reference, as well as a blackboard, so that it’s not just me who remembers to note down when we’ve run out of ketchup or shampoo.

The effect is instantly positive. I feel released from some of the ‘worry work’ and my husband and children feel included. One evening, I even came home to find two extra children that my husband has spontaneously brought back from after-school club, proving his point that a play date, like life, doesn’t have to be organised.

However, the real test is when my 81-year-old godfather comes to stay. Before, I would have cleaned the house and shopped for his favourite food. But this time, busy with work, I get my husband to make up a bed in the spare room and order a takeaway.

Initially, I feel proud that I’ve cut back on some of the emotional labour I usually take on and my godfather doesn’t seem to mind that his duvet cover isn’t ironed and he’s getting stuffed-crust pizza for tea.

But, after he’s gone, I’m suddenly struck by something. While it’s absolutely fine to rant about all this extra ‘unpaid’ work, dish out menial household tasks and start a spontaneous play date revolution, what doesn’t feel OK, is stopping the ‘emotional’ part of emotional labour – the bit that means simply being kind, like making the effort to cook an elderly relative a decent meal.

There’s actually a huge amount of pleasure to be derived from ‘holding people in mind’. I hate planning meals (and my husband now shares that responsibility), but I love the joy it brings my family when we all sit round the dinner table together. By the same token, caring about my ageing godfather isn’t really something that should belong to a spreadsheet or ‘to-do’ list.

The truth is that ‘worry work’ isn’t something I can fully resign from, and I don’t think I’m alone in that. I want the time I spend on emotional labour to be acknowledged, and I’m happy to delegate, lower my expectations and do away with the unnecessary. But I won’t stop ringing the friend whose partner just left her or sending my husband’s mum a Mother’s Day card from her grandchildren.

To me, those things can’t be classed as ‘labour’. They’re about kindness and caring – and if that’s socially ingrained in me, so be it. I wouldn’t have it any other way.

Change the dynamic: Start to manage your emotional labour