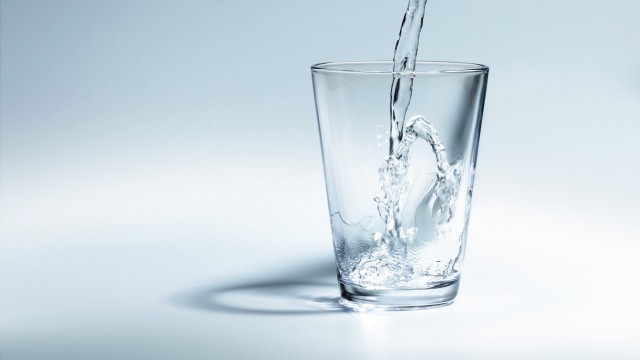 You may have noticed the buzz about alkaline water recently: It’s a staple of the alkaline diet, and promoted by celebs like Miranda Kerr for its supposed health perks. Among those perks is the belief that alkaline H2O which, by definition, has a higher pH (and lower acidity) than what comes out of the tap can help neutralize stomach acid and relieve symptoms of gastroesophageal reflux, aka heartburn. But does this claim really hold water? We spoke with some medical experts to find out.

All foods and beverages have a pH level. This stands for power of hydrogen, and it measures the concentration of hydrogen ions in a substance. The pH scale ranges from 1 (the most acidic) to 14 (the most basic, or alkaline). Most tap and bottled water has a pH around 7, which is neutral, although it can vary slightly in either direction.

Waters marketed as alkaline have a higher pH—usually between 8 and 9. Consumers can also buy ionizing pitchers, or filters that attach to a faucet to make regular tap water alkaline.

What’s behind the heartburn claims?

Your body also has its own pH levels, says Evan Dellon, MD, a gastroenterologist and associate professor of medicine at the University of North Carolina School of Medicine. “For example, pH tends to be neutral in the blood, lower in the stomach, and higher in the small bowel,” he explains.

The alkaline water industry claims that problems can arise when the body becomes acidic, and that their products can neutralize pH and promote a better balance.

But our bodies don’t actually need help in this area, says Dr. Dellon: “We have an incredibly sophisticated machinery to keep the pH levels where they should be throughout the body, and there’s not a lot that you can do, eat, or drink to change that.”

One 2012 study done in a lab found that water with a pH of 8.8 did seem to inactivate pepsin, an enzyme related to the production of hydrochloric acid (the kind found in your stomach). The water also had a buffering effect against hydrochloric acid itself. “These in vitro data suggest that alkaline water may be a useful, risk-free adjunctive treatment for reflux disease,” the study authors wrote, although they also stated that more research was needed, including studies in humans.

Dr. Dellon agrees: “We really have no evidence that this works in real life scenarios,” he says. “Meanwhile, we do have many other reflux treatments that are well studied and pretty effective for people.”

Heartburn is caused by a flow of stomach acid backward into the esophagus, and drinking an alkaline solution may neutralize that fluid for a few minutes, according to Dr. Dellon. But it won’t solve the underlying problem of why that acid’s there in the first place.

“It’s no different than taking a Tums or drinking a lot of milk—which some people with reflux like to do because milk is also slightly alkaline,” he says.

Drinking regular water may provide some relief, as well: “It will raise the pH of your stomach, dilute the acid, and clear out the esophagus—so there’s lots of good reasons to drink water in general, and to stay hydrated,” Dr. Dellon adds.

Patricia Raymond, MD, a physician in Norfolk, Virginia, and fellow of the American College of Gastroenterology, says her patients ask her about the alkaline diet and alkaline water as alternative treatments for reflux, but she doesn’t recommend either.

“I do support complementary medicine when we know that it can actually help,” she explains. “But the medical opinion is really lacking on alkaline water. We’re not excited about it as a potential treatment.”

Dr. Dellon also cautions that alkaline waters aren’t regulated by the FDA. “So there’s no guarantee that the pH number on the bottle is even accurate,” he says.

And while the pH levels in most commercial waters should be safe to drink in moderation, he warns against ingesting too many high-alkaline foods or beverages. “The esophageal lining is built to withstand acid damage, but it’s not at all built to be exposed to things that are alkaline,” he says. “So for some people, alkaline beverages could cause irritation.”

If you do drink alkaline water, or are considering it, talk to your doctor about the potential risks and benefits, suggests Dr. Dellon. And if you suffer from frequent heartburn, ask about treatment options that address the underlying problem, not just the symptoms.