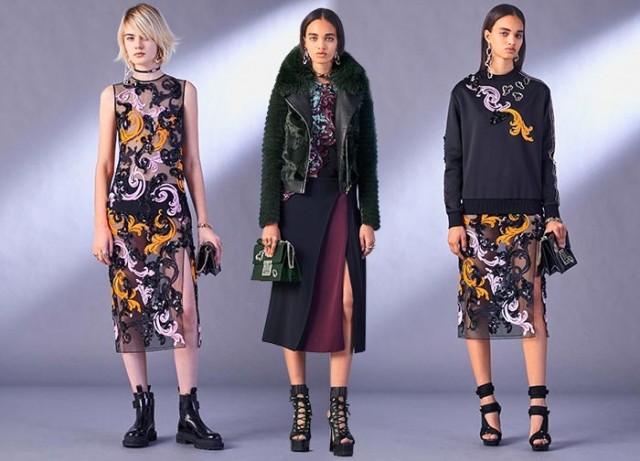 Donatella Versace liked her athleisure-infused Versace spring 2017 collection so much that she decided to continue exploring this motif for her Versace pre-fall 2017 collection, too.

In doing so, she managed to translate the trans-seasonal collection to an astounding number of 40 different looks, which perfectly embody both Versace’s sportswear appeal and the pre-fall’s signature cozier figures, which make us feel warm and comfortable while wandering through the streets.

Aside from the fact that designer Donatella Versace nailed the whole “sportswear meets urban-chic-wear” look for the second time in a row, the first thing that is worth mentioning regarding this pre-fall 2017 collection is that she actually made an innovation within the innovation.

Most of the 40 pieces were created utilizing new tailoring techniques and custom-made fabrics that mostly consisted of laminated tweeds, embroidered tulle, techno threads, and fil coupé printed with curlicue patterns, which indeed helped the overall collection achieve a signature and one-of-a-kind, high-end look. As if such innovations weren’t already enough, the Versace pre-fall 2017 collection also treated us to a brand new print dubbed “barocco-flage”, which is an intricate mix of Versace’s standard animal prints combined with camouflage designs, knitted into curve-hugging dresses. Given the fact that it has so far received overall positive comments, we expect this print to be replicated in Versace’s future seasonal collections as well.

As for the Versace pre-fall 2017 line-up’s color palette, Donatella “La Signora” Versace focused on darker tones, with only a few rich yellow and light blue accents, designed in the form of Baroque-esque motifs, interrupting the collection. A vivid dark purple dominates the scene, giving us the illusion nothing was created while keeping sportswear in mind.

One needs, in fact, a second look to actually realize that the Versace pre-fall 2017 collection is all about sweatshirts, utilitarian parkas and cozy cropped pants, as everything is polished and refinished with Versace’s visionary take on fashion. Although being predominantly sportswear-inspired, this collection tricks us even with an unapologetically uber-feminine allure, as all of its must-have staples feature sensually flattering silhouettes. Even Donatella Versace’s iconic suit jackets got filtered through an athleisure-meets-feminine lens, which will surely make those who look for flirty staples to wear while on the go rejoice.

For this pre-fall 2017 collection, Donatella Versace decided it was also about time to make some strong fashion statements through the accessory line as well, as we all know designing new it-bags and shoes is always a good idea whenever it comes to resort collections. Biker boots, platforms, mini handbags and clutches completed most of the looks, adding overall (sub)urban-chic vibes that will keep on the Nineties-inspired motifs going strong during the upcoming fall season, too.