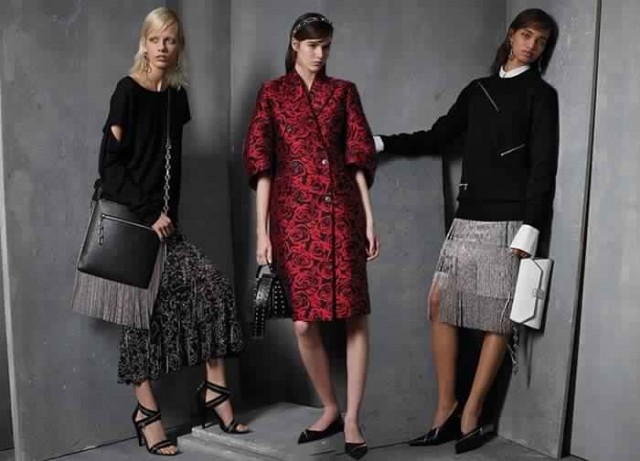 The Michael Kors pre-fall 2017 collection was, in fact, inspired by both the Eighties and all those women, who “who follow their instincts, who give the middle finger and wear what they want,” namely two of the motifs Kors rules best.

Those who love following Michael Kors’ runway shows and collections, might, however, be specifically intrigued by the Eighties-inspired part of the collection, as we know the American designer debuted his first-ever runway show in 1981. Like Zac Posen with his pre-fall 2017 collection, Michael Kors also took a trip down memory lane to revisit his signature Eighties-inspired staples in a more contemporary way that could fill the woman’s pre-fall wardrobe with something she could easily “wear to lunch”.

For these reasons, the Michael Kors pre-fall 2017 collection is all about statement, structured pieces, as well as slightly androgynous proposals, which despite being closer to looks to wear during lunchtime, easily transition from day to night whenever properly accessorized.

The color palette is similar to that of most of the newly released pre-fall 2017 collections, meaning that dark colors and beige, light browns unapologetically dominate the scene. Michael Kors, however, also added a rich, fiery red to the lineup, which definitely gave the overall collection its distinctive and ultimate Eighties-approve allure. The Eighties were not, however, the only comebacks Kors resuscitated, as aside from sharp, clean-cut lines, structured shoulders and kimono jackets, the Project Runway star also brought back the mannish suit again.

As a whole, the collection was way less whimsical and eccentric than what we would ever possibly expect when pairing “Michael Kors” with “the Eighties”, as both its color palette and minimalist outfits were combined together in looks that could appeal to any taste.

Textured coats in a rich, floral embroidered material were paired, for example, with nothing but one of Kors’ signature handbags and pointy flats, while the elegant suits and overalls either featured ton-sur-ton colors or featured timeless combinations of shades that were just a pleasure to look at.

The 10-piece Michael Kors pre-fall 2017 collection also features a cropped evening mermaid dress in light brown and beige that we bet will become a red-carpet must, as well as an abounding amount of accessories that really prove Kors’ fascination and love for iconic purses and shoes. Apparently, according to Kors as well, pointy shoes and midi lengths will be intrinsic parts of next year’s signature aesthetics!