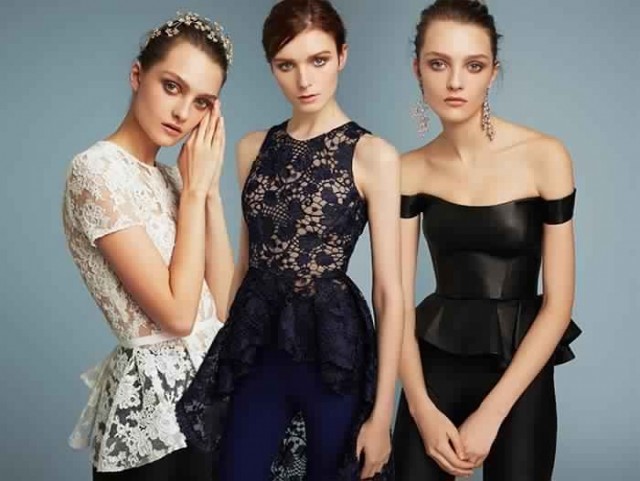 Like many designers, Reem Acra also decided to revamp her notoriously pompous and glamour designs with more wearable and ready-to-wear ensembles just in time for the pre-fall 2017 season.

The latest Reem Acra pre-fall 2017 collection could, in fact, surprise those who look for Acra’s designs whenever they have to get inspired or find something fancy to wear on special occasions, as the Lebanese creative mind tends to usually treat us to fairytale-like, bridal-inspired, haute couture frocks.

For this 28-piece collection, she actually did treat us to red carpet-ready garments, but the overall impression that we get is that of a coherent continuum of outfits that, whether they consist of separates or single looks, could follow us all day round from the morning to the late evening.

The Reem Acra pre-fall 2017 collection is divided into three distinctive and different sections, with each one of them always being elegantly playful. While the first and third sections focus on Reem Acra’s new takes on fashion, respectively one of them being more contemporary and the other one – more conceptually opulent, those who are specifically looking for standard Reem Acra designs can count on voluminous gowns, cascades of tulle and organza, as well as mermaid frocks as seen in the collection’s second part. Besides being definitely more wearable than usual, this collection’s three sections feature another common fil rouge, which makes the entire line-up, if possible, even more exotic. From the collection’s color palette to most of the fabrics and figures used, each one of the staples exudes strong, modern time Middle Eastern princess vibes, which might come from Reem Acra’s recent experiences and work projects in Dubai.

The designer, who is currently still in Dubai, has been shooting a “Project Runway”-like spinoff called “Fashion Star” there for a while now (she is one of the judges and mentors), and surely got overwhelmed by the city’s opulence, urban newness, and traditions.

That is why the collection alternates luxurious fabrics and golden embroideries with modern sheer designs and butterfly sleeves, the latter of which help embody a sort of harmonious balance as seen, for example, with this pre-fall 2017 collection’s more structural figures. Intricate tops with bejeweled embroideries, served by Acra at the very end of the collection, probably reach the Middle East-inspired theme’s peak most, and we bet they will particularly appeal to the celebrities and personalities who are going to attend big events at the end of summer 2017. The color choice is particularly appealing too, as it veers from One Thousand and One Nights blues to desert ochre touches. The second part of the collection even focuses on Arabic princess-inspired rich pinks, magentas and greens, which make us hope for a multi-colored Reem Acra fall/winter 2016-17 collection, too.