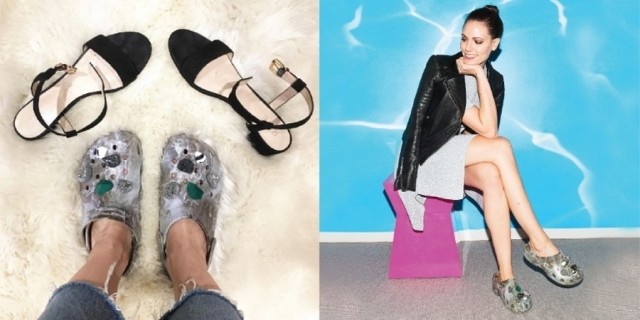 “Do you notice anything different about me?” I asked my husband, flexing my feet and rubbing my leg against his as I slipped into my train seat next to him on our way home one evening.

It would have been hard for him not to notice my Crocs. This particular style was a gray-and-white marble print embellished with bulbous glittery stones. Kane presents one of the most significant shows on the fashion calendar (the major runway shows are held twice a year in New York, London, Milan, and Paris), and by significant, I mean that what he shows, people wear. If you’re not one of the people who can afford his $2,400 shirtdresses, you surely end up perusing the knockoffs of said shirtdresses at Zara and Forever 21. Like it or not, Kane is a man of influence. What this means is that Crocs are about to happen. Scoff you may, and scoff perhaps you should, but I urge you to take me at my word. Lucy Thornley, the vice president of product for women’s and kids at Crocs, told me that Kane approached Crocs well in advance of his runway show and spent three months creating the final runway shoe. Kane, Thornley said, always knew he wanted to use the “classic” Croc, the most “iconic” silhouette the brand offers. The same marble print and stones on the Crocs featured on the clothing in his collection. The stones include malachite (“modestly priced” according to gemsociety.org) and druzies (“inferior” pieces can go for $15 to $20 while “the best” pieces can go for $200). The stones will not fall off the shoe because they are affixed via gibbet to those holes that come on the top of your classic Croc. Think of them as little Croc earrings. If you feel like mixing and matching your stones or taking them out all together, you can do that. Though a Croc without boil-like stone protrusions on it is like a pizza without cheese, if you ask me The shoes will be sold by luxury retailers when the spring collections go on sale in about another month’s time, Thornley said, though, since the final list of retailers is being finalized, she could not name specific outlets. The price will be “more in line with the Christopher Kane price point” than the Crocs price point.

When I first put the shoes on my feet, I felt uncomfortable. Well, physically comfortable because that’s the whole point of a Croc, but emotionally and psychologically uncomfortable. First, I was wearing Crocs, which the Cut, for one, has called “100 percent effective birth control” and “the world’s most reviled shoe.” Second, they were glittery, heavily embellished Crocs, so there was no denying what was on my feet.

When I spoke to Thornley, she wanted to know how I was finding my Crocs.

Apparently this is what Kane was going for. “You just said exactly what Christopher really liked about the clog himself,” she said. “He just loved the fact that it made his foot look bigger.” This may mark the first time in the history of fashion that a designer has wanted to make a part of a person’s body look bigger.

Later I went to take the subway home, and as I approached my train, I heard a woman call after me. Sure that she would have something to say about my intense footwear, I turned around.

“Is this yours?” she said, holding up a bracelet that had fallen off my wrist.

I thanked her and accepted the bracelet, noting that here was a stranger who wasn’t embarrassed to associate with me.

I spent the entire week in my shoes studying the expressions of people I shared various trains with for traces of scorn or bewilderment. I detected no such judgment Toward the end of the second day in the Crocs — the day I discovered that they look, quite unlike my Adidas Originals, thoroughly terrible when worn with my barre socks and cropped leggings — I began to feel a fondness for them. They were becoming a part of me, and not just because I had committed to wearing them for a week in the name of journalism.

Walking to the train after my barre class, I passed an Ugg store on Lexington Avenue. Looking through the window, without even thinking about it, I noticed a pair of boots I liked. The Crocs were clearly changing me from the inside, inspiring warm feelings toward all kinds of footwear denounced by fashion people. The next day, I went to get my hair cut at a salon that is generally considered one of the trendier ones in Manhattan. If anyone was going to notice my shoes, it would be the staff of that salon. When my hair stylist approached me to collect me from reception, his eyes immediately went to my feet.

I explained, seeing as I finally had a real audience for this information, that they were the Christopher Kane Crocs that had just walked the runways at London Fashion Week and they weren’t in stores yet.

My stylist had just returned from a trip to Germany, where, he said, shoes like my Crocs — marble-print clogs — were “everywhere.”

“I think they’re cool,” he assured me.

Once he finished with my hair and removed my long black smock, unveiling my Crocs as though a prize on The Price Is Right, his assistant came over to say that she also loved my shoes. A stylist at the next station over joined the conversation. My Crocs had turned me into the most-talked-about person in the salon. And there were legit fashion models on the other side of the room getting their hair dyed blonde. Legs for days and flawless features they may possess — but designer Crocs? I don’t think so.

My husband’s attitude toward the Crocs did not change over the course of the week. We had to attend an event for his family over the weekend, one that would require him to wear a jacket and me a cocktail dress.

“Can I wear my Crocs on Saturday night?” I asked.

“Please don’t,” he said. (The first time I met his dad I wore designer sweatpants and that did not go over well.) I acquiesced and packed a flat.

Saturday morning we went to buy flowers for my mother-in-law at a nice flower shop. I was wearing skinny jeans and a white T-shirt — minimalist weekend wear — and my glaringly obvious and enormous Crocs.

“I love your Crocs!” a woman working in the shop said to me as I was choosing between a cheaper and more expensive bouquet. Was it just a coincidence that the only people enthusing over my shoes were those who I was buying goods and services from? I took the costlier of the two bouquets and gleefully reported to my husband that the woman in the flower shop loved my Crocs.

At brunch, my sister-in-law said they were “awesome” — and it’s true, no matter where your feelings for Crocs lie, these Christopher Kane ones are awesome — but realistically, no one is going to come up to you and tell you to your face that you’re wearing the most hideous shoes known to man.

What I will say about the Crocs is this: They are a lot of look, a very strong flavor of footwear, but like any trend, eventually you get used to them and start to love them. Tons of massively popular trends start in a hopeless/hideous place: mom jeans, reflective shades, shower slides, Tevas. It’s just that when a Jenner and a Hadid start wearing them everywhere, and major designers put these things on their runways, and all the people who want to get photographed outside of Fashion Week start wearing them, the ugliness becomes normalized. These Crocs are unlikely to be much different.

Toward the end of my week in them, I really thought they looked, well,cool.