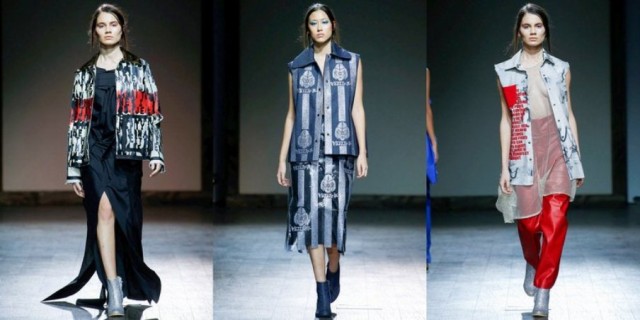 What’s Georgia? Is it a state? Is it a name? Yes and yes. But it’s also a country with a flourishing fashion scene of its own. The Caucasus region nation received some attention the past few seasons thanks to Vetements designer and newly appointed creative director of Balenciaga, Demna Gvasalia, a native of the post-Soviet republic. Beyond Gvasalia, though, there are plenty of other Georgian designers who have remained in the motherland and have much to offer. The opening designer of Mercedes-Benz Fashion Week Tbilisi, Avtandil Tskvitinidze of the label Avtandil, presented a strong case for homegrown talent. After a set of clingy slip dresses slashed hip-bone-high made their way down the runway, Tskvitinidze got things going with a dismantled spin on a slinky white slip dress—which had sleeves loosely gathered at the back—bouncing on a bare spine. Sexy and cool, the piece was in sync with the deconstructed shirt trend seen at Monse, Joseph, and Altuzarra during the Spring ’16 collections.

Tskvitinidze also riffed on plastic, another trend seen on the runways of Loewe and Christopher Kane. Though those synthetic items looked like they could be difficult to wear, Tskvitinidze gave the tough look an easy spin: Empire-waist PVC snap-button skirts with thick strips of glitter were placed on top of yellow and red minidresses. It was a pairing with a scrappy, bazaar-plucked feel that often comes with awkward layering—and an aesthetic that cool kids are fiending over right now at Vetements.

Tskvitinidze’s take on denim was nice, too—morphed into wide-leg trousers and tanks and emblazoned with lightning rods. Some of the strongest pieces were the statement coats: hooded trenches with a raincoat-type shine, printed with graffiti. A street art–slathered oversize vest on top of a long mesh tank top and loose, cropped red leather trousers was fit for a trippy, techno-bopping night in early-’90s Berlin. Were their echoes from other major runways? Sure. But Tskvitinidze makes everything appear fresh, even earnest. That’s something that will help put Georgia’s fashion industry on the map—and its designers’ clothes into closets abroad.