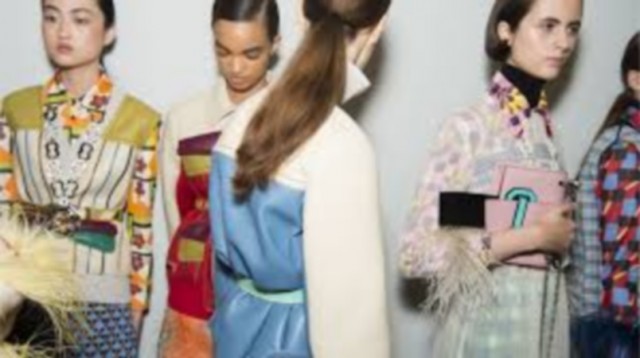 No matter how surreal world headlines became, the SS17 season felt like fashion’s attempt to make the best out of a shaky situation  a moment of optimism in a strange year. It was a place to party (as seen at Stella McCartney and Dolce & Gabbana), escape to more glamorous eras past (as at Saint Laurent, Balenciaga and Louis Vuitton’s throwback to Eighties flash and sex), celebrate womanhood (the rousing feminist manifestos at Christian Dior and Versace) and revel in girly, pretty things (the onslaught of pink and frills at Valentino, Preen and more.)

These were clothes to lift the mood, clothes to remind us of the power in dressing the way we want to feel.

It’s time to work less and play more. Fashion has unleashed a colour riot of optimism on the runways from the mix of bold and playful florals that appeared everywhere from Balenciaga to Miu Miu to the literal dance party that took place on Dolce & Gabbana’s carnival-themed runway. Fashion wants you to get happy. From soft leg of mutton and puff sleeves to folksy florals, there was a rustic, of-the-land undercurrent running through spring/summer whether in Jacquemus’s love letter to his rural childhood in the south of France or Sarah Burton’s fantastical trip to the Shetland Isles at Alexander McQueen. Big hands-free pockets, drawstring pulls, and practical outerwear at Marni, Balenciaga, Bottega Veneta and more make it easy for a busy woman to get up and go. Man Eater dresses straight out of a Robert Palmer video at Saint Laurent, Christopher Kane and Louis Vuitton put the exclamation point on a message of sex and Eighties glamour. And in case you were in doubt about which decade is ruling here, look no further than the rise of George Michael’s Wham which made soundtrack appearances at Balenciaga and Philosophy. Meet your new workwear: stealth wealth at its most luxe, practical and wearable. Power dressing just reached a new level of cool thanks to Bottega Veneta, Marni, Louis Vuitton, Céline, Loewe and more. After an age of easy separates, the dress is back for day in a huge way, appearing everywhere (Chloé, Prada, Roksanda, Erdem, J.W. Anderson, Rodarte – seriously, everyone did one). The silhouette of choice is long and swingy  ideally with a frill or two. Handkerchief hemlines optional.