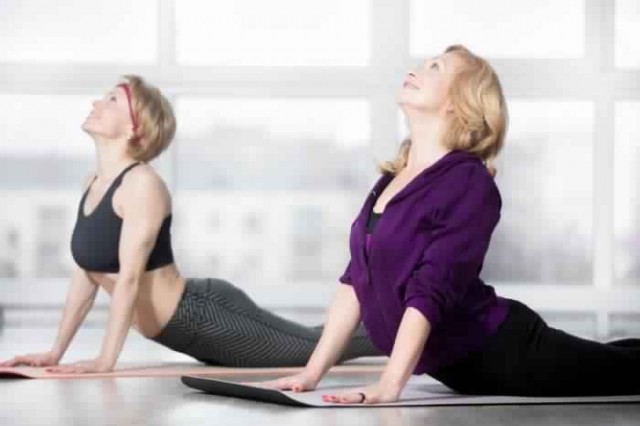 Lower back pain affects millions of people in the United States, and for some, the pain becomes chronic, preventing them from performing daily tasks. Could yoga help to treat this condition? A new review investigates.

Lower back pain is a very common condition that can sometimes become disabling. Between 2004-2008, lower back pain accounted for 2.06 million visits to the Emergency Department in the U.S.

While some people recover quickly from such an episode, for others, the discomfort can last up to 3 months or even longer. If the pain – clinically described as occurring between the lower rib and the gluteal folds – lasts for more than 3 months, it is considered “chronic.”

Chronic back pain can sometimes be caused by diseases such as radiculopathy, a common neurological disorder, or spinal stenosis, a condition in which the spaces in the backbone narrow down, therefore putting pressure on the spinal cord.

Most of the time, however, the cause of chronic lower back pain remains unknown. In these cases, it is considered “non-specific.” Options for treating chronic non-specific back pain are limited, often involving self-care and over-the-counter medication, such as paracetamol or anti-inflammatory drugs.

The new review, published in the Cochrane Library, uses existing research to investigate the effectiveness of yoga for treating chronic, non-specific lower back pain.

The meta-analysis pooled the results of 12 randomized controlled trials carried out in the U.S., India, and the United Kingdom, and it included a total of 1,080 participants aged between 34-48 years.

Three of the studies compared yoga with back-focused exercise, while seven trials compared it with no exercise.

‘Low to moderate evidence’ suggests that yoga helps with back pain

Because the trials were not blinded and were based on self-assessment and self-reporting, Cochrane researchers considered the risk of bias to be high. They therefore reduced the level of certainty in the outcomes to “moderate” in order to account for the potential bias, and reduced it even further for studies wherein results were imprecise or conflicting.

Overall, the reviewers found that yoga may improve back function and reduce lower back pain in the first 6-12 months.

However, they found the improvement to be relatively small and, in fact, the reviewers point out that the effect is not large enough to be considered clinically significant.

The review determined with “low to moderate certainty” that yoga improves back-related function when compared with no-exercise control groups. Therefore, it remains unknown whether there is any difference between yoga and other back-focused exercise.

In terms of harm, yoga was found to worsen the back pain for 5 percent of the participants, but it was not associated with serious adverse effects.

The authors mention that larger scale studies with a longer follow-up period would be needed to assess the long-term health effects of yoga.

“Our findings suggest that yoga exercise may lead to reducing the symptoms of lower back pain by a small amount, but the results have come from studies with a short follow-up. At the moment we only have low to moderate quality evidence for the effects of yoga before 6 months as a type of exercise for helping people with chronic lower back pain.”

“The yoga exercises practised in the studies were developed for low back pain and people should also remember that in each of the studies we reviewed, the yoga classes were led by experienced practitioners,” adds Wieland.