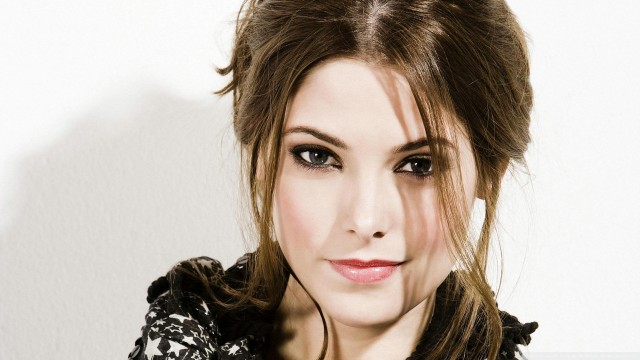 Over a crazy-hard hike, Twilight star Ashley Greene talks getting strong without bulking up, staying body positive in a critical world and actually liking to hear the word no.

“This is the part I was telling you about,” Ashley Greene says, pointing down at the canyon below. We’re hiking in the Santa Monica Mountains, high above the fast-paced world of Hollywood, and the views at the top are stunning: clusters of lavish homes, lush trees and a blue sky that looks like it came straight out of a Crayola box.

It doesn’t hurt that it’s a perfect, 84-degrees-and-sunny California day, and that up here, it’s just us, a dusty trail and a few random hikers who don’t seem to recognize that there’s a movie star in their midst. There are also no paparazzi—only a guy and his big, fluffy dog, which Ashley (who has four dogs of her own) stops to pet. “Hey, cutie,” she says, scratching the dog’s head before heading back uphill.

This hiking trail, located less than 10 minutes from her home, is a regular part of the 28-year-old’s fitness regimen and a place she comes to clear her head. “Part of working out for me is having the ability to break away from all the stresses of the day,” she says. “Up here, it’s so pretty—you feel like you’re not in L.A. at all.” Then she adds with a laugh, “Don’t give away the location!”

It makes sense that sporty Ashley—who, fittingly, is the face of Oakley women’s eyewear—needs a private escape from the daily pressures of her acting career. In 2005, when she was just 17, she left her mom, dad and brother in Jacksonville, Fla., and moved to Los Angeles to pursue acting. In 2007, she hit the jackpot by landing her best-known role to date: Alice Cullen in the Twilight saga, a part she went on to play in five blockbuster movies released over five years. In her latest film, Burying the Ex, she plays Evelyn, a girlfriend from hell “who also happens to be a zombie. Evelyn just takes it to the extreme,” she says—and when it comes to her workouts, so does Ashley, considering that an hour and a half into our hike, she has barely broken a sweat.

Besides hiking, what are your favorite workouts?
I try to be active every day. I work with my trainer, doing metabolic circuit training, three times a week, and I do kickboxing, which I really love. It’s one of the most intense things because at a certain point you just stop thinking and react. It’s a great way to get out aggression. I also do a VersaClimber class that’s great because it’s so much cardio, and you just sweat everything out.

You have an older brother. Were you a tomboy as a kid?
Yeah, and we were super close and still are. He lives with me. I have a lot of boy cousins, and for the longest time I was the only girl. I played football with them and climbed trees and did martial arts. My mom tried to put me into dance, and I was like, “No thanks, Mom. I’m gonna go fight people.”

Did you ever get injured?
I broke my femur. I was on a trampoline—so, kids, listen to your parents! I was just standing there, and my brother’s friend and my best friend were jumping. He double-bounced me, and his knee connected with my femur and snapped it. I knew it was broken. The sound was unmistakable.

Oh no, how awful.
I have a high pain tolerance, and they put pins in, and when they took them out later it rebroke the same day. I had to wear half a body cast up to my waist. My biggest concern was that it was summer and I wasn’t going to be able to go into the pool. But I definitely got really close to my parents because I had to rely on them for everything.

Did your upbringing help you when you moved to L.A.?
Because I was so young, I didn’t grasp the insanity this world has to offer, and how difficult it is to break into this industry. My dad was a Marine, and we were taught we could do anything we put our minds to, and that mediocrity wasn’t an option. I got a C once, and I was like, “C is average.” And they were like, “You’re not average, and you’re never gonna be average.” I feel lucky to have my family, and friends who will call me on my sh-t. To hear yes all the time is just not healthy. That’s a hard thing to realize coming out here: Every single day, no matter how successful you are, there’s always gonna be failure.

Do you ever feel like you’re only as good as your last role?
Unfortunately, yeah. That’s the thing: You can have an amazing performance and a great role, but the second you don’t get the next one, the feelings of rejection and not being good enough kind of come back to you. Thankfully, I have a good support system. But the struggle is real.

You’ve been called too fat?
Yeah, and listen, everyone has a different perception of what they think perfect is, and you’re never gonna be able to please everyone. It’s so tough, but once you come to terms with that, it’s a little easier to deal with. At this point, I care more about what people are saying about my acting ability than what I look like. When I started and got Twilight, I think I was 20, and I was more impressionable. Now I’m 28, and if people are unhappy with the way I look, then they can be unhappy. But I feel strong and healthy and happy. Some people, like Gisele Bundchen, have crazy genes, and that’s just what she looks like. But most of us are not 5’11” and don’t look like that naturally.

Have you tried any weird fad diet where you later thought, What was I thinking?
I lasted a day on that cayenne pepper diet. It gave me a headache and I was really grumpy. It was like, “This cannot be healthy.” I’ve done juicing and then quickly realized that I couldn’t just do juices if I was gonna continue to work out the way I do. Right now, I feel the strongest I’ve ever been. I lift things and my guy friends are just like, “What?!”

Is bulking up a concern?
I was hesitant to start training the way my trainer trains because it is a lot of weight. But the way he does it, your heart rate is up the entire time, so you actually get very strong but stay lean. That’s important because on film, you don’t want to be bigger than the male actors, which does happen.

Really, the guys are small?
A lot of male actors are so tiny. Unless they’re from Australia, and then you get, like, the Hemsworths and Hugh Jackman.

What’s a typical meal for you?
Even though there are meals on set, I generally pack stuff. I have a lot of willpower, but once you get to craft services, it’s doughnuts and Cheetos and it’s more difficult to say no. There’s a reason I don’t keep Cheez-Its in the house.

Is that your weakness?
I like Cheez-Its a lot, which goes against everything I stand for. I like sodium so much, but that’s difficult when you’re on-screen because it makes you retain water. At the end of the day, you have to allow yourself those things, as long as they’re not a staple. You don’t want to be the girl who’s looking at the back label of everything!

Do you cook?
I do, a little bit. My boyfriend, Paul Khoury, grew up cooking, so we cook at home a lot. That way you can control what’s going into your body.

Would you like to have kids?
Oh, yeah. No more than three. Probably two. I’m the opposite of my mom—she had us really young, and now she and my dad are able to have fun. I want to get married, enjoy that, and then when I’m ready to completely give myself to my kids, I will. But I’m a little too selfish still.

Have you ever gotten a paycheck and gone wild?
Once, after one of my bigger paychecks, I bought a Burberry bag and a Marc Jacobs bag. You have to allow yourself to splurge once in a while. Although I’ve definitely had to learn restraint. It’s hard when you grow up relatively poor; I watched my dad work for everything we had. So being able to buy things you only dreamed of, you have to check yourself. Because if you do that too much, you’re gonna be broke—but with a bunch of really nice bags!

Instagram accounts: “@bestvacations and @livelokai. The photos are always breathtaking and inspirational. Or anything with animals.”

Fitness apps: “Lumosity and Fitbit, for mind and body.”

Hair finds: “Davines shampoo and conditioner, and anything Oribe for styling.”