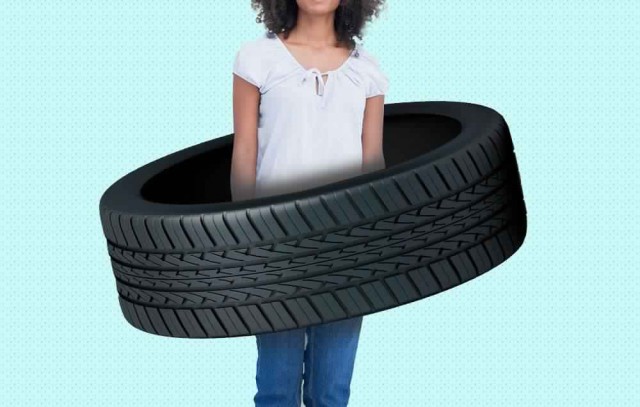 For many women, the belly is the last weight-loss frontier. After months of cutting calories, dropping pounds, and slimming your arms, legs, face, and butt, your stomach remains pretty much unfazed.

WTF?! While everything from your genetics to your age can cause fat to cling to your belly, the biggest culprit is good ole evolution. “The body preferentially sends fat to the waist so that the stored energy is near the vital organs in case they need it,” says registered dietitian Betsy Opyt, R.D., creator of Betsy’s Best. Plus, having plenty of energy on deck is especially important for women when it comes to baby making. So there’s that.

That being said, what you eat (and its hormonal effect) ultimately determines what fat you burn and what sticks around your stomach, she says.

Here are five common diet mistakes that may be standing between you and ditching the belly fat for good: To burn fat, you’ve got to eat some fat. But choosing the wrong types could keep your belly fat from budging. Case in point: In one 2014 Swedish study, healthy-weight individuals who ate an extra 750 calories from saturated fat per day for nearly two months gained significantly more abdominal fat compared to those who opted for polyunsaturated fats. According to researchers, diets high in saturated fat activate genes related to abdominal fat storage. To get more polyunsaturated fats, like omega-3s, fill up on fatty cold-water fish like salmon, tuna, and mackerel twice per week, says Mira Ilic, M.S., R.D., a registered dietitian and women’s health obesity expert at the Cleveland Clinic. Spreading your calorie intake out over the course of the day by eating small meals every four to five hours can keep you from gaining belly fat, says Ilic. That’s because research published in the journal Current Biology suggests that your body’s cells become more resistant to insulin at night, meaning that large meals eaten at night spike blood sugar higher than they would at lunchtime. Over time, that means increased inflammation, higher insulin levels, and, of course, belly fat Simply swapping out refined carbs that spike your blood sugar for fiber-packed whole sources like whole grains, beans, and fruit can help you ditch belly fat, says nutritionist Vandana Sheth, R.D.N., spokesperson for the Academy of Nutrition and Dietetics.

That’s because “diets high in sugar challenge the pancreas to make more insulin, which results in fat storage throughout the middle, even if you’re not genetically predisposed to abdominal weight gain,” says Ilic. What’s more, sugar intake is tightly linked to levels of cortisol, a stress hormone that results in inflammation and belly fat. Double whammy.

Plus, the fiber from unrefined carbs can put a dent your weight-loss goals. In one Obesity study, people who upped their daily intake of soluble fiber by 10 grams automatically reduced their belly fat by 3.7 percent over the course of five years. “The average American only gets 14 to 15 grams of fiber per day,” “Alcohol is metabolized differently than food,” says Opyt. “It shuts down the entire digestive process so it can be detoxified by the liver, which produces free fatty acids and puts the body in overload.” Once digestion begins again, the body begins to store food calories in the form of belly fat.

So you don’t have to ditch your happy hour habit to burn belly fat. Just stop overdoing it on days that you drink. “Inflammation fuels the body’s tendency to store fat around the stomach,” says Iliac.

And one of the best ways to curb inflammation and belly fat is to make sure you’re diet is packed with antioxidant-rich fruits and veggies, she says.

Another great way to fend off fat is by sipping tea, according to a 2014 study out of ULCA. Researchers found that polyphenols found in green, black, and oolong teas reduce inflammation and abdominal fat. So try swapping your coffee or afternoon snack for tea time.