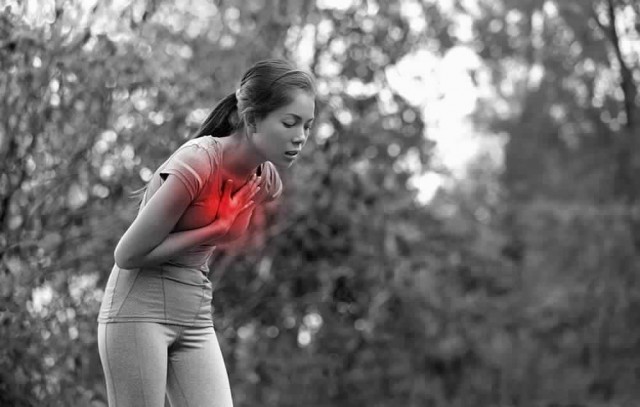 So there you are, settling into your stride about halfway through a run, when a sudden pain punches you square in the chest. As the feeling tightens, you clutch your collar in a panic. Is it a totally random heart attack? Well, don’t race to conclusions just yet. Although the symptoms you’re experiencing are downright frightening, they could be signaling a number of issues that run the gamut from serious to not so scary.

“Chest pain that occurs while running may have a variety of causes,” says David Friedman, M.D., chief of heart failure services at Long Island Jewish Valley Stream Hospital. “While it’s important not to ignore pain, not all chest pain is cause for concern.”

In order from least to most severe, here are the five most common reasons why your chest could hurt during a run, plus pro tips for kicking your pangs to the curb.

Jumping into a new jogging routine can be physically taxing—especially when you’re a rookie. If you haven’t had much training in the sport, it could be that you’re working out at a rate or intensity that your body isn’t accustomed to yet.

“You need to back off and be more realistic about what you’re trying to accomplish,” says Janet Hamilton, C.S.C.S., exercise physiologist and lead running coach for Running Strong in Atlanta. She suggests warming up with a walk, then easing your way into a relaxed running pace. “If you can recite the pledge of allegiance as you’re running, then you’re probably running at the right effort,” she says. “If you’re having a hard time chatting, slow down.” (Torch fat, get fit, and look and feel great with Women’s Health’s All in 18 DVD!)

Heavy respiration during a run may be painful at first, but the strain typically goes away with consistent practice. Also, it goes without saying that any new workout regimen you’re considering should be cleared by your doctor first.

2. The muscles in your chest are cramping

Just like the muscles in your legs, the muscles surrounding your rib cage (called “intercostal muscles”) are also prone to cramping while you’re pounding the pavement. This sharp pain is highly localized—meaning you can usually put a finger on exactly where it hurts—and might worsen with movement. According to Friedman, dehydration or electrolyte depletion could be the culprits behind the spasms.

Since there’s not much you can do to strengthen your intercostal musclesanyway, try refueling with some water and changing up your breathing pattern. “If you tend to breathe on a symmetrical rhythm (for example, in for two steps, out for two), you may want to play with breathing in an asymmetrical rhythm (inhale for two steps, exhale for three) so that you’re constantly switching which leg is in weight-bearing position when breathing is initiated,” says Hamilton.

You may not realize it, but jogging piles a ton of pressure onto your digestive system. For one thing, Friedman explains, the increased tension within the abdomen causes the esophageal sphincter (the muscle at the bottom of the esophagus that keeps your stomach contents from rising into your throat) to relax, contributing to heartburn.

To ease the burn and keep your food in your stomach where it belongs, Friedman advises forgoing heavy meals before runs. If you do eat prior to hitting the road, stay away from trigger foods—that is, anything spicy, fried, or caffeinated. “You may also want to monitor the foods you consume before runs to determine if a particular food doesn’t sit well with you,” says Hamilton. “If you’re burping if you run after eating a banana, then switch to something else as your pre-run snack.”

4. You have an unaddressed lung condition

Here’s where things get dicey. There are a few different pulmonary issues that can spark pain during a sprint, the most common of which is asthma. Pre-workout medication can help prevent an exercise-induced asthma attack, and a rescue inhaler should always be kept on hand during a run if you’re a diagnosed asthmatic. “If you don’t quickly respond to your inhaler, this could signify worsening breathing mechanics and the need for urgent care,” says Friedman.

Other dangerous—but less common—causes include pneumothorax (a leakage of air into the space between the lungs and the chest wall) and pulmonary embolism (a blood clot in an artery supplying the lungs). Both of these are often paired with a sudden onset of severe pain and shortness of breath, which doesn’t go away with rest. If you see these red flags, don’t ignore them; get the help of a doctor right away.

Now for the worst-case scenario. You already know that the harder you run, the harder your heart has to work. But if your coronary arteries—which bring blood to your ticker—contract, the insufficient blood supply can induce chest pain when you exercise. This condition is known as “angina.” And, of course, physical strain can also prompt a heart attack (an acute blockage of a coronary artery) or an arterial tear. Accelerating and worsening chest pain, heavy sweating, nausea, vomiting, shortness of breath, significant palpitations, and/or dizziness that worsens with high-intensity activity but is relieved with rest are all indications that something could be very wrong with your heart, Friedman adds.

If you have even the slightest suspicion that your ticker isn’t ticking quite right, the best thing to do is book it straight to your physician’s office. “When in doubt, go get checked out! The worst you’ll experience is some expense and some embarrassment if it turns out it was nothing life-threatening,” says Hamilton. “If it was something serious, you may have just saved your own life.”